﻿﻿After more than a few years in the publishing process, an article by the Aurum Project has been published in Similia, The Australian Journal of Homoeopathic Medicine. The title is “Proving of a Morning Sickness Combination Formula.” This proving was conducted by the Aurum Project for Homeopathic Medical Research in Australia, which is an independently run non-profit charity, in conjunction with Nature Care College.

Provings of combination remedies are rare, if perhaps non-existent. Joerg Wichmann from the website www.provings.info argues, “I have never heard of a proving of a combination formula.” To reconfirm the controversial nature of conducting this proving he added “My impression is that those colleagues who conduct provings and those who use combination remedies tend to be different people.”

This proving was not conducted in an effort to add to the theories that abound about combining homeopathic remedies. The pros and cons of the idea of using a combination remedy are discussed elsewhere.

Research about combination remedies is not usually done in the form of provings, instead it is usually done with an aim to broaden clinical evidence. So without declaring that our work and this article is an argument from either side of the trenches, it is still a bold move to publish it.

A number of questions were asked in the process of this proving: Would a meaningful remedy profile actually emerge? Would a jumble of unrelated symptoms emerge? Is there any value in conducting provings on combination products?

The product was a Homoeopathic Morning Sickness Formula. It was one of many homeopathic combination formulas available at the time. The product contained a mix of four homeopathic remedies: Symphoricarpus racemosa 200c, Colchicum autumnale 30c, Nux vomica 30c, and Tabacum 30c, as well as tabletting aids.

There were 10 provers, 9 female and 1 male with all provers showing symptoms. The notes written by the provers included an expected number of GIT symptoms, however, all provers also experienced symptoms in the joints.

The authors of the homeopathic proving article were Alastair Gray, Linlee Jordan and Penny Barron. 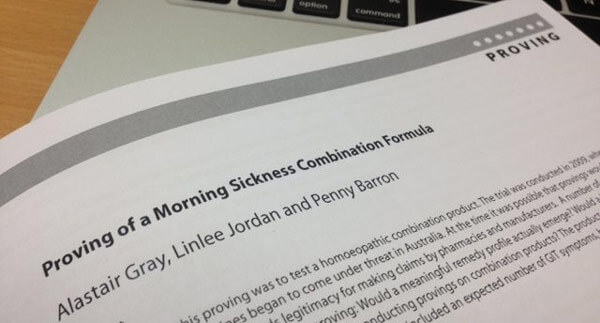 The term “proving” comes from the German word, prufung, which means to “test” or “examine.” A proving is conducted on volunteers who are in a reasonable state of health (they are called provers). Doses are repeated until provers start to experience symptoms of a change in state. The provers record everything they experience, whether physical, emotional, mental, or even spiritual. At the end of the proving all the records are compared to find the physical symptoms, states of mind, feelings, and experiences that the provers have had in common, which can reasonably be attributed to the emerging themes of the substance.

“Provings are the pillars upon which homeopathic practice stands. Without accurate provings all prescribing indications are bound to be vague guesses at best, and pure fiction at worst. There is no other way to predict the effect of any given substance as a remedy with any degree of accuracy.” The Dynamics and Methodology of Homeopathic Provings by Jeremy Sherr, MCH, FSHom, RSHom

A proving is not designed to ‘prove’ that homeopathy works but more to identify the effects of the substances when used as a remedy. They need to be replicated and then submitted to the rigorous process of systemic clinical verification, as suggested by Hering more than 100 years ago. In this proving of a combination remedy the methodology of Hahnemann’s proving was followed, as outlined by the contemporary homeopaths Paul Herscu, Bernd Schuster, but mainly the work of Jeremy Sherr.

The opportunity to conduct this proving came up against the background of a push in many countries, including Australia, to restrict access to homeopathic medicines. One of the usual arguments given by regulators is a lack of scientific evidence and the need to protect the public. In some countries ‘traditional evidence’ is used and accepted as legitimacy for making claims by pharmacies and manufacturers to sell their products. This confluence of events, the tightening of access to homeopathic medicines in Australia, overlapped with an intellectual curiosity and desire for a robust modern proving method. The complete proving document is 83 pages.

Themes from the symptoms reported in the provers’ notes

After the completion of the Morning Sickness Combination Remedy proving it was noticed there were several themes contained within the notes.

The first theme to be addressed is the fact that the Morning Sickness Combination Remedy Formula was a preparation designed to focus primarily on GIT symptoms in pregnancy, including nausea, vomiting, light headedness and fatigue, especially those symptoms triggered by smells. There were definite experiences of these symptoms within this proving, however symptoms such as these did not occur in all provers.

Another important theme was the fact that many of the provers experienced either an increase in their fatigue with desire to sleep during the day, or an amelioration in their existing fatigue. There were many references to wanting to sleep all day, or well into the afternoon, as well as interrupted or unrefreshing sleep. Fatigue and unrefreshing sleep are common symptoms of early pregnancy.

Some of the provers experienced morning sickness type symptoms and fatigue, unrefreshing sleep and desire to sleep during the day, which may be associated with morning sickness. Many also awoke out of a need to urinate, with increased thirst. Increased urine output and accompanying thirst is another common symptom of early pregnancy.

Every prover experienced moderate to severe joint pain, especially in the extremities.

What is the value of this proving?

It is through asking questions and answering them, and then moving forward that we can transform opinion to evidence. More research is required if conclusions are to be drawn.

The full Morning Sickness Combination Remedy homeopathic proving may be viewed by members of the Aurum Project in the members articles and videos. If you are not a member, you can join for only $45 a year by clicking here.