A case series analysis by the Aurum Project was published in June 2009, concerning the remedy Hyoscyamus – commonly used for childhood behavioural problems. The aim of the study was to increase materia medica knowledge. A retrospective study was performed on fifteen children’s cases from over a six year period. This included: age/sex distribution; presenting symptoms; medicine relationships; efficacy and causations.

The case series number of patients was fifteen.

Results suggest a traumatic event before, during or after the birth as a causative factor of patients needing this medicine. The report and analysis was based on similar work done in Austria regarding the medicine Medorrhinum by Gnaiger-Rathmanner and Böhler.

In our view, the most interesting information gained from this case series analysis of Hyoscyamus niger was the number of children (twelve of fourteen) who had experienced a traumatic event during pregnancy, birth or post natal period.

Age/sex distribution showed that twice as many boys as girls were prescribed Hyoscyamus niger.

Some data was not collected at all over the six year period, for example: cost effectiveness, which is now seen to be an Australian Research Priority.

The impetus for undertaking this study of the clinical use of one medicine came from a desire to use a research perspective to gain further understanding of materia medica. As a result, all cases over a six year period which received the medicine Hyoscyamus niger at the Harbord Homœopathic Clinic in Sydney were studied and analysed. All cases which were given Hyoscyamus niger at a stage in their treatment, and not only the successful cases, have been included.

Factors taken into account included: age/ sex distribution, presenting symptoms, other medicines used in treatment in relationship to the medicine, efficacy of the medicine and possible causations. The cases are taken from a six year period between 1998 and 2004. Most cases are from between 2002 and 2004. 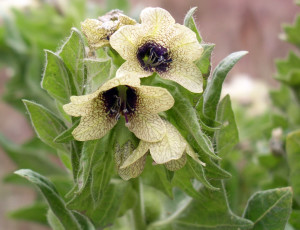 This Homeopathic medicine belongs to the plant kingdom

Hyoscyamus niger is a homeopathic medicine belonging to the plant kingdom. Its common names are “Black Henbane” or “Bilsenkraut”. It belongs to the natural order of Solonaceae (nightshades). Murphy states that the plant is very similar botanically and in pathogenic action to Belladonna.

It is a biennial plant.  It has a long thick corrugated root, which is of a brown color externally, but whitish internally. The  leaves are large with long hairs upon the midrib. The beautiful flowers are funnel-shaped, of  a dull yellow color with purple veins and orifice. Black Henbane is a native of Europe and Asia. In America, it grows mostly in the waste grounds of old settlements, and grave yards and around the foundations of ruined houses. The active principle of Hyoscyamus or Henbane is called hyoscyamine. The roots, seeds and the leaves are used as medicine. For the preparation of the homeopathic remedy, the tincture of the fresh plant is used.

The name Hyoscyamus, also called ‘Hog-bean” finds its origin in the Greek words “hys, hyos” = pig and “kyamos” = bean. And indeed, the bean is toxic for both, man and pigs. But maybe, this name was given, because delusions and hallucinations occur after the ingestion of the beans, and one behaves “like a pig”?

If we look to the British Homeopathic Association when they are discussing love, hate and jealousy, we are told that the Hyoscyamus materia medica includes  talkative, suspicious types who tend to be immodest. Their jealousy may be so intense that they may act rashly and make a fool of themselves. They may go into fits of laughter about inconsequential matters. They may also develop a fear of being poisoned, so will become suspicious of food, medicines and drinks. 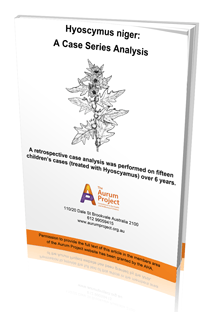 The full case series analysis article is available to members in the articles and videos area click here. Make sure to be logged in as a member to gain access.

If you are not a member then why not join up? The cost is only $45

Similia, the peer-reviewed journal of the AHA, has been published since 1988 with the earliest editions going back to the Australian Federation of Homœopaths, the predecessor of the AHA. Similia is listed on the Australian National Library website; it is also indexed in the CINAHL online database and Similia articles are now also available on the EBSCO online database (starting with Vol. 28 No. 2).

Other homeopathic research which included Hyoscyamus as a remedy

A study which included Hyoscyamus as one of the medicines was an Open-Label Pilot Study of Homeopathic Treatment of Attention Deficit Hyperactivity Disorder in Children and Youth conducted in 2014. 35 participants were enrolled over 11 months.

Another ADHD study by John Lamont was published in 2006: Homoeopathic treatment of attention deficit hyperactivity disorder. Hyoscyamus and Stramonium were among the remedies included

In India, a prospective study was conducted in 2014, to evaluate the usefulness of homoeopathic intervention in Schizophrenia, in untreated cases and antipsychotic treatment resistant cases, to verify indications of medicines, and to assess relapse, if any. Out of 188 enrolled patients, 17 cases did not complete the baseline information. Hyosyamus was one of the medicines found effective during relapse.

A thesis by Glenn Ingram Jr, was submitted to the faculty of the National College of Naturopathic Medicine entitled: Diagnosis and Treatment of Autistic Spectrum Disorders With a Focus on Homeopathic Prescribing.  Comparisons between Stramonium and Hyoscyamus and other topics are explored.

A paper by Dr Barvalia and his team was entitled Effectiveness of homoeopathic therapeutics in the management of childhood autism disorder. Autism is one of the complaints treated by Hyoscyamus homeopathic medicine uses in this research.