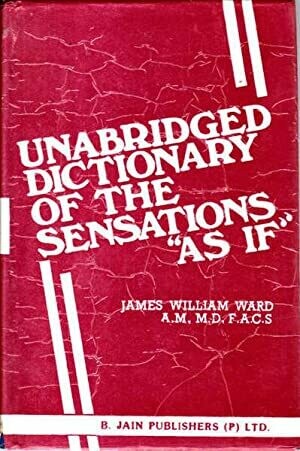 Unabridged dictionary of the sensations "as if" part 2 clinical*

The book“ Unabridged Dictionary Of The Sensation As If” was written by Dr. James William Ward. This book must have been published in the late 1930s. This is part 2 the clinical part.

His final work, The Unabridged Dictionary of Sensations “As if” was completed just two weeks before his death. The compiling of this great work required the patience of a superman, and perhaps it was an indirect cause of undermining that marvelous physique that finally succumbed on July 12, 1939, just eight hours after he had finished a busy day at the office.

CONTENTS OF THE BOOK:

4.Parts of the Book-

The foreword is written by Dr. Willis A. Dewey. This volume contains a vast amount of pathogenetic and clinical symptomatic information of the Materia Medica. In this work will be found the results of the provings of many remedies by large groups of provers, with the detail of symptoms in their own language.

This work contains all the provings by Hahnemann and his contemporaries on down to the present time, making it necessary to discard every effort previously attempted and proceed with a more extensive research.

Dr. Dewey stated that the research involved in the preparation of this book covered the extensive library of the Homoeopathic Foundation of California, the second largest collection of Homoeopathic literature in the United States and was carried on for a period of over six years, the results of the first two of which could very aptly be termed as “love’s labor lost.”

According to Dr. Dewey, the Materia Medica was a life-long study of Dr. Ward’s from his college days when the opportunity to study and associate with Drs. Timothy F. Allen, St. Clair Smith and Martin Deschere, sparked his unbounded interest.

Please note: This is a second hand book and may show signs of being loved by a previous owner: there may be wear and tear, corners may be creased, the previous owners name may be written inside the front page and even sometimes underlining of words. However, sometimes the book may also be new. Also the cover or edition may vary from the one shown. 🙂