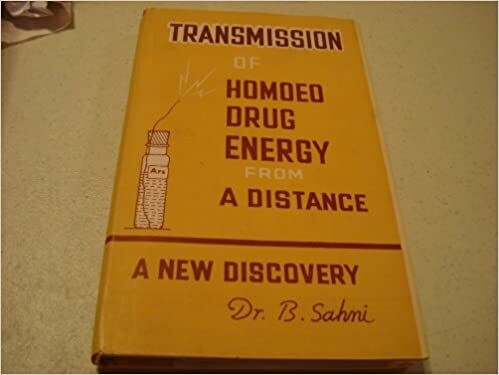 Transmission of Homoeopathic drug energy from a distance*

Dr. Sahni's transmission of drug-energy through the patient's hair depends upon radiesthesia.

• The author has used this system extensively in his therapeutic work with excellent results.

• The hair of the patient acts as an ariel to broadcast the drug-energy.

This is a well written book containing the details of a number of difficult cases cured by transmission process. The author has also included some cases cured by other homoeopaths working on this line.

Dr. Sahni-a man of indefatigable spirit and peerless character, again in 1943 took up his studies with renewed vigour and sincerity. He graduated in 1947 from C.M. College, Darbhanga. Once he had chosen Homoeopathy as his love, he could hardly live without it and so even during his college days, he kept up his interest in it.

Dr. Sahni joined Basic Training School at Patna in 1948. He,also went to Sevagram for higher training in basic education. Soon after finishing B.T. course, he was married to Dr. Sumitra Sahni, who, too, had done her basic training course from Patna Basic Training School. Both of them were appointed Assistant Teachers in Post & Senior Basic Schools at Kolhanta Patori in the district of Darbhanga respectively.

At no stage of his career, Dr. Sahni's interest in Homoeopathy flagged. While in Govt. service, he passed his M.D. examination in Homoeopathy and got a first class. This encouraged him to establish a charitable Homoeopathic dispensary under the social education scheme. Dr. Sahni combined in him the best qualities of a doctor as well as a teacher and thus earned a good name for himself in both the fields. Dr. (Mrs.) Sahni has had a definite role to play in her husband's successful ventures. Both husband and wife were transferred to Mandar Block, Ranchi as S.E.O.S. in the beginning of 1954. They worked in this capacity for nearly four years to the entire satisfaction of all concerned. Dr. Sahni's love for learning and extraordinary zeal always helped him climb fresh heights. While in service, Dr. Sahni appeared at the M.A. Examination in Philosophy and got a high second class. The same year he competed for a gazetted post in Bihar Public Service Commission. He also took his M.A. examination in sociology and got a high second class. In his service career, Dr. Sahni had also the opportunity of successfully completing many in-service training courses organised by the Central and State Governments. While in service at Bhagalpur, Dr. Sahni came out with his research on "Transmission of Homoeopathic Drug-Energy" which was greatly appreciated by recognised centres of Homoeopathic science. In recognition of his valuable research many academic bodies and institutions for Homoeopathic science conferred upon him honorary degrees and fellowship.

Dr. Bandhu Sahni was born on 17th January, 1925 in a village called Karkouli in the district of Darbhanga. Dr. Sahni's early childhood is a tale of pain and penury. His father, being a poor cultivator, found it difficult to maintain the family with his petty income. Dr. Sahni's extraordinary intelligence and zeal for acquiring knowledge at once attracted the notice of Late Munshi Udit Narain of Rajnagar who was well-known for his love for learning and magnanimity. Under his loving care Dr. Sahni spent a couple of years at Rajnagar and passed his matriculation examination in 1942. The same year his father died, leaving him broken-hearted. However, he sought admission in I.A. classes in C.M. College, Darbhanga, but since he was a fire-brand nationalist, he could not help taking part in the freedom movement of 1942. This made him realise that no sacrifice could be considered greater than one done for the sake of one's country. It was during this period that he was attracted towards the Homoeopathic science, which to him, held promises in new awakening in poor masses. It was a chanticleer of new dawn which in its turn would bring health and happiness to the suffering humanity.