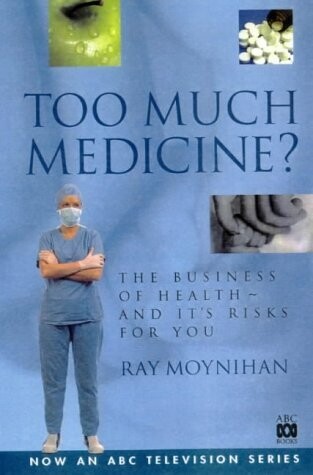 Too much medicine: the business of health and it's risks for you* (Moynihan)

Most doctors believe medicine to be a force for good. Why else would they have become doctors? Yet while all know medicine's power to harm individual patients and whole populations, presumably few would agree with Ivan Illich that “The medical establishment has become a major threat to health.” Many might, however, accept the concept of the health economist Alain Enthoven that increasing medical inputs will at some point become counterproductive and produce more harm than good. So where is that point, and might we have reached it already?

Any consideration of the limits of medicine has to begin a quarter of a century ago with Illich, who has so far produced the most radical critique of modern—or industrialised—medicine. His argument is in some ways simple. Death, pain, and sickness are part of being human. All cultures have developed means to help people cope with all three. Indeed, health can even be defined as being successful in coping with these realities. Modern medicine has unfortunately destroyed these cultural and individual capacities, launching instead an inhuman attempt to defeat death, pain, and sickness. It has sapped the will of the people to suffer reality. “People are conditioned to get things rather than to do them . . . They want to be taught, moved, treated, or guided rather than to learn, to heal, and to find their own way.” The analysis is supported by Amartya Sen's data showing that the more a society spends on health care the more likely are its inhabitants to regard themselves as sick.

Illich's critique may seem laughable, even offensive, to the doctor standing at the end of the bed of a seriously ill person. Should the patient be thrown out and told to cope? It is of course much easier to offer a critique of cultures than to create new ones—and Illich (like doctors, ironically) is much stronger on diagnosis than cure. But he does write about recovering the ability for mutual self care and then learning to combine this with the use of modern technology. Though his polemic was published long before the internet, this most contemporary of technologies—combined with the move to patient partnership—is shifting power from doctors back to people. People may increasingly take charge, more consciously weighing the costs and benefits of the “medicalisation” of their lives. Armed with better information about the natural course of common conditions, they may more judiciously assess the real value of medicine's never ending regimen of tests and treatments.

Perhaps some doctors will now become the pioneers of de-medicalisation. They can hand back power to patients, encourage self care and autonomy, call for better worldwide distribution of simple effective health care, resist the categorisation of life's problem as medical, promote the de-professionalisation of primary care, and help decide which complex services should be available. This is no longer a radical agenda.

Ray Moynihan is a journalist, author, documentary-maker and academic researcher based in Australia.