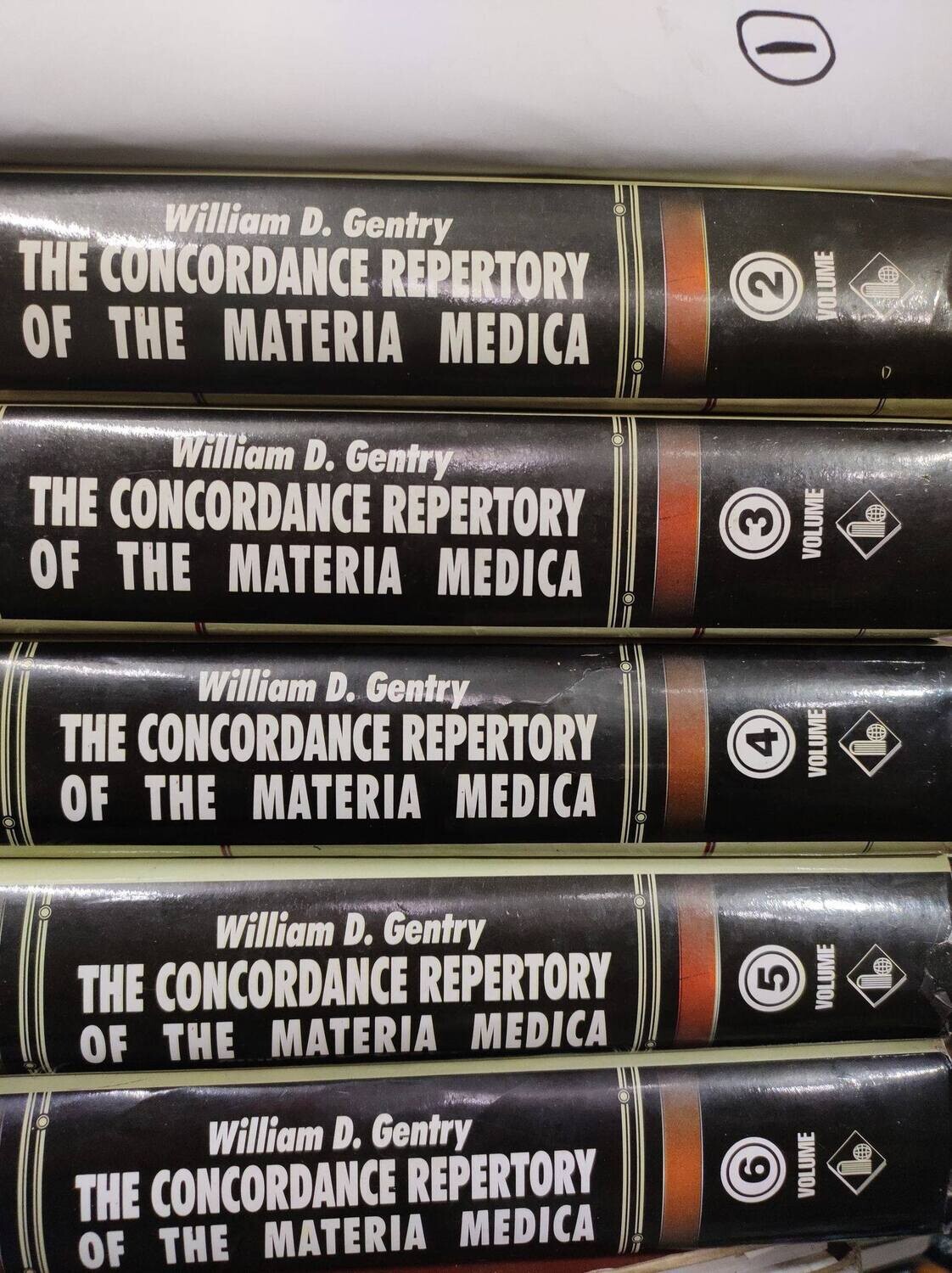 The concordance repertory of the materia medica - 6 volumes (Gentry)

Hard back - six volumes - weight is more than 5kgs so postage will be according to weight. Each volume has a list of abbreviations of the recommended materia medica preceding the alphabetic concordance.

Concordance repertory belongs to the Puritan group of repertories where the symptoms are given in their original form without much change. For the serious student of repertory.

The rules adopted for the preparation of the work — are
1) Select and give all the more characteristic pathogenetic symptoms.
2) Include only such clinical symptoms as have been repeatedly verified.
3) When two or more remedies have the power of producing a similar condition, include them as merely suggestive, under the name of the condition produced.
4) Give the noun, verb, and essential adjective in the sentence.
The idea which finally gave origin to the work presented itself in the autumn of 1876. Author wanted to find a remedy for a symptom — the symptom which caused the search is ” constant dull frontal headache , worse in the temples, with aching in the umbilicus ” — that peculiarity made it difficult to find. After a weary search and final success in finding the remedy, the author exclaimed — if only we had a repertory arranged on the plan of Cruden’s Concordance of the Bible, it would have been necessary only to refer to the letter ‘ U ‘ and under ‘ umbilicus ‘ find at once the desired symptom.

It was decided then that the attempt should be made to materialize the thought into activity, and with a determination the work was begun.

For example: “ Fancies seeing cats and dogs ” – this may be found in C following “ cats ” , in D following “ Dogs ” and in F following “ Fancies ” .
And in the like manner any symptom in the concordance may be found .
Frequent difficulty may be met in finding a symptom on account of difference in phraseology of the materia medica writers or upon the part of the person desiring to find the symptom. Therefore, when there is a failure to find a symptom under one word, the synonym should be thought of.

The work comprised of six large volumes.
In searching for any desired symptom, the physician should first express it mentally , or better in writing, employing words commonly used, and then select the word in the sentence expressing the central thought, idea, fact, condition or object of the sentence or the noun, verb, essential adjective, and referring in the concordance to the word selected . [ the synonyms should also be thought of ]

These historic volumes may have numerous typos and missing text. 1891
Excerpt: ...

Kali-iod. Chill in am or evening after lying down.
Nitr-ac. Chill in a. with violent thirst and redness of face.
Plumb. Chill in forenoon with heat and cold feet in a.
Sulph. Chill in morning; also in a. from three to five o'clock, with desire for warmth, especially of sun.
Coni. Coldness and trembling every day between three and four in a. with stitches in head.
Asaf. Feeling of heat in a. and evening almost like burning in head, forehead and cheeks, without thirst.
Ipec. Fever from five to six a.
Phos. Fever worse from four to eight a.
Lyc. Frequent flushes of heat during a. and evening, with thirst and redness of face.