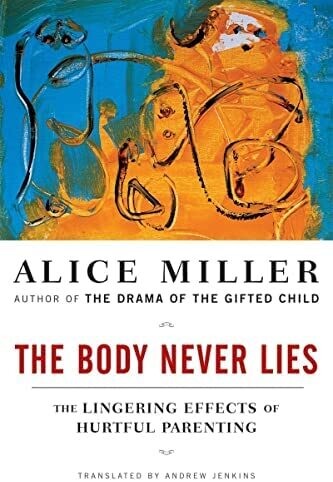 Never before has world-renowned psychoanalyst Alice Miller examined so persuasively the long-range consequences of childhood abuse on the body. Using the experiences of her patients along with the biographical stories of literary giants such as Virginia Woolf, Franz Kafka, and Marcel Proust, Miller shows how a child's humiliation, impotence, and bottled rage will manifest itself as adult illness—be it cancer, stroke, or other debilitating diseases. Never one to shy away from controversy, Miller urges society as a whole to jettison its belief in the Fourth Commandment and not to extend forgiveness to parents whose tyrannical childrearing methods have resulted in unhappy, and often ruined, adult lives. In this empowering work, writes Rutgers professor Philip Greven, "readers will learn how to confront the overt and covert traumas of their own childhoods with the enlightened guidance of Alice Miller."

In this book, Alice Miller presents the idea that childhood abuse manifests as adult physical illness. She holds that the Fourth Commandment—honor your father and mother—keeps both patients and therapists from addressing the parents' role in, and responsibility for, the abuse. The book is a classic read to establish that idea firmly.

There are three sections, a preface, an introduction to each section, and a postscript. The meat of the book is in the postscript, wherein Miller states her argument most cogently and sets forth her recommendations for effective treatment techniques. The first section goes through a series of brief vignettes about famous people who died young and also had been abused as children. The second section goes into more direct discussion of the ways in which the body harbors the effects of abuse, as well as a fair amount of autobiographical material. The final section, written as the diary of an adolescent girl, is a case study of anorexia. The girl is fictional, and the diary reads like, well, a fictional diary written by someone with an agenda.

In her books, Alice Miller repeatedly asks that society consider the ill effects of parenting that is coercive, abusive, and humiliating. She asks that we consider the everyday, commonplace humiliations as well as the cases of gross abuse. She has been a champion for children and people who were abused as children. In this book, she puts forth a reasonable hypothesis, the truth of which many people will intuitively recognize from their own practices.