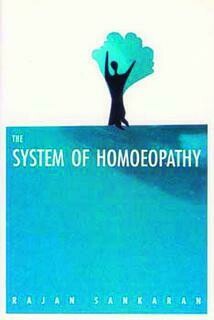 This book is illustrative of Dr. Rajan Sankaran´s method of case taking, case analysis and follow up. It includes 35 detailed cases and a number of short cases through which emerges a System of Homeopathy. Also hints and guidelines about understanding the mental state, eliciting the mind and body connection, central delusion, what to do and what not to do with dreams etc. Plus a further understanding of miasms and sub-kingdoms.' Printed in India

This long-awaited book is Sankaran’s thoughts and experience about homeopathic practice. This is a necessary book for anyone who wants to know about the cutting edge of homeopathy! Besides writing about the various kingdoms of medicines, Sankaran also discussed various sub-kingdoms.

A large number of case studies presented with actual interview records, detailed case analysis and basis of remedy selection make this book very absorbing. The follow-up seeks to demonstrate actual response. To appreciate his system we have to keep in mind, without prejudice, his concepts of disease and other approaches as explained by him. Briefly discussed in Chapter I they are: –
1. The disease is central disturbance which affects first the mental and general plane and then the organs. This is what has to be treated, if peripheral disturbances are to cease to exist.
2. The mental disposition, not merely mental symptoms, is more important; it is not discrete or separate but connected by a situation.
3. Disease are a posture adopted by the organism for which a particular posture was adopted no longer exists. Hence disease is a delusion ie a false perception of reality. The state of being of a person can stem from a situation or delusion. To remove the state one must remove the delusion.
4. In children there is a striking resemblance of the state of the infant and that of the mother during her pregnancy and sometimes of the father.
5. There are four stages of the disease:
a) The delusion or the main feeling.
b) Coping as the intensity increases.
c) Failed stage when the person is unable to cope though trying his best.
d) Given up stage, where the person makes no further effort to cope.
In (a) the feeling are uncompensated.
6. Awareness of the reality is cure anmd health is freedom.
7. Many of the symptoms of the patient may be in the compensated form (covering up by an act of will) and symptoms of the uncompensated state. Are essential to understand the state of the patient and prescribe. In dreams, the feelings expressed are raw and uncompensated; therefore they are often the key to understanding the patient and his delusion.
8.Each remedy is a state of being.
9.The delusion are also analysed in terms of the miasms. Apart from three basic miasms of Hahneman, Dr.Rajan had introduced in – between miasms like Typhoid, Sub-acute, Ringworm.Malaria, Cancer and Leprosy, with their corresponding remedies and nosodes. This approach enables better understanding of the case, while helping narrow the choice of the remedy.

After discussing the evolution of his system in the first chapter, he presents 25 case studies. Documentation of the whole interview, a detailed case analysis, the major points in the case including the central disturbance, delusion miasm, remedy kingdom, the reportorial rubrics and the final remedy selection with the follow-up, allowing proper assessment of remedy action leading to cure or relief, are presented in each case. These assorted and chronic cases (except one acute) facilitate understanding of his methods of case taking, value addition and final selection. Appropriate footnotes aid this process.

At the end of these 25 cases, the reader is fairly familiarized with the concepts. Then follows chapter 27 titled ” the system” -a packed 48 pages- in which he discusses in detail the concepts of case taking and case analysis. Thereafter 10 more cases are presented.

In his system there are four levels of case taking-
1st level- only the symptoms are gathered.
2nd level- important hints obtained at first level, are acted on, and the line of enquiry is established. Dreams are asked at the end of second level.
3rd Level-directed enquiry -going deep into these is sues and feelings, including PQRS.
4th Level – this epicentre of delusion or sensation changes the complexion of the case, as we can see through the eyes of the patient. Connections are unearthed or the common point of the deepest mental and physical sensations surface. At this point the miasm, kingdom of the remedy and other ideas, all converge to a sharp focus to facilitate remedy selection mind, especially his fears and dreams. These rubrics can be substituted for one another. Finally he asks confirmatory questions about the kingdom and the remedy.

Dr. Rajan then discusses, with brief case illustrations and cross-references to the earlier cases, each aspect of case taking. The paints he makes are:
1. The chief complaint, either alone or together with other complaints, may give an idea of the kingdom,miasm,stage of the disease and the delusion either in part or in whole.
2. The effect of the compalint on the patient is importani; eg one patient with severe pain and heaviness in the bdomen did not want to move. She could neither move out nor be with the plants and trees she loved. This feeling of being restricted, as if in prison, with a feeling of having done something wrong, led to selection of Cyclamen.
3. Pathology is nothing but an expression that coresponds to the delusion, but it serves to make the delusion real. Eg: a woman felt a tremendous performance pressure as she was severely restricted by her father. When he died, she developed eruptions on her fingertips, making it impossible to work as a dentist, point or sew. The delusion was kept alive even after the exit of the exciting factor.
4. The actuality versus perception by the patient is often startling different. Eg:in one case where Carcinosin was prescribed, the child found disorder arolund her and felt obliged to put some order into it, but felt handicapped because she was too small. Later when she helplessly warched her parents fighting and hitting each other. She developed autoimmune vasculitis with gangrene. Another patient experienced stress associated with appearing in public. Here it was not timidity; She was so tall and masculine that she felt others looked down upon her. The rubric-Delusion, diminished, short; delusion,looked down upon and disgust for self-led to prescription of Lac-can.]
5. Dreams reveal uncompensated feelings and are the most direct path to the patient’s delusion. Do not ignore dreams nor interpret them. Dr Rajan Discusses, with illustrations, this topic in great detail- what to look for in dreams actual and virtual dreams. Actual dreams are those which occur in sleep while virtual dreams include other forms of uncompensated behaviour in the waking state-eg fears, fantasies, sensations as if, metaphors, interests and hobbies, hopes, religion and philosophy, Each is illustrated.