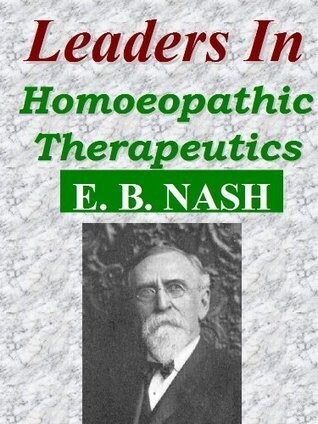 "I have to say that I love Leaders In Homeopathic Therapeutics. The analysis of each remedy is a good place to start and then keep reviewing. I enjoy Nash’s style. It is materia medica at its best. The comments, that are so Nash, are perfect and keep me smiling. I have 5 copies of Nash’s little gem and keep one by my bed side. It is a must read and then memorize for every homeopath!"

"E.B. Nash’s Leaders in Homeopathic Therapeutics is my favorite homoeopathy book to read. He has wit and tells his story. It gives me a chance to practice homoeopathy with him. I am able to look at his life as a prescriber and the way he thinks. I never tire of E. B. Nash’s writing. He is my favorite! He has inspired me to write. I always read his remedies, his stories, and prescriptions as I write."

From the preface: My motive for offering this third book to the profession is to put into such form (for committal and refreshment) some of the leading symptoms of many remedies as to make the road to a practical understanding of our Materia Medica as plain, and easy as to be followed as is possible. For a student to at once confronted with the almost interminable mass of symptoms enumbering our complete works on Materia Medica is confusing and discouraging. Not all the symptoms so appearing are equally valuable. Indeed, while some are of inestimable value, some are of absolutely no value at all, because they have not the effects of the drug claiming to have been proven. This sifting of the genuine from the spurious has occupied the time and pains-taking care of the best observers of our school for many years, and the work is still going on, and must continue to go on in the years to come. Nevertheless, we must, as students, begin with the reliable, and as practitioners retain for ready use what we have. Since putting out my first book, I have received many letters asking me to tell how I arrived at my practical understanding of Materia Medica and Therapeutics. Well, I first read such authors as gave the action of drugs from a "pathologico-physiological" standpoint, and thus obtained a ground work, which was valuable as far as it went, but for the understanding of drugs in their finer shades of action I never came to anything like a practical knowledge of Materia Medica for homoeopathic prescribing until I studied and committed to memory "Hering’s Characteristic Cards." These were followed by the "Keynotes" for Guernsey, the "Therapeutic Hints" of Raue, Lippe, Dunham, Wells, etc., to which I have been adding and preserving until the collection has reached the number contained in this work. Some will object to this way of studying Materia Medica. Let them.I believe it to be the best. At least it is the best way to begin it, and leads to a more thorough and practical study of it from a Hahnemannian standpoint than any other. One reason why we have so much unhomoeopathic prescribing is, I believe, because, being confused by the mass of symptoms in our larger works, the student is discouraged and led to study and depend on the general action of drugs too often as laid down in old school works. Of course prescribing from such a knowledge alone must result very unsatisfactorily. What would such a course have to do with a patient who had, for instance, these four leading symptoms of Arsenicum. "Great prostration, excessive anguish and restlessness, burning thirst for cold water in small quantities at a time, all worse at 1 to 3 a. m. ?" What would the name of the disease or the general physiological or pathological actions of the drug have to do with such symptoms as these; and yet what true homoeopath that does not know that these are in many different diseases valuable indications of its administration?

Hardcover 148 pages out of print