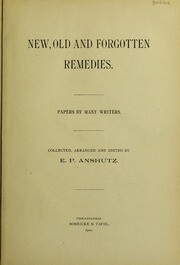 This book is an old classic.

Anshutz arranged material from provings and arranged it in a simple and easily understandable manner. He has also included new (at the time) and old drugs such as formic acid, Gun Powder, Calcarea Calcinata, Icthyol, Indol, Glycerin and others. He did not include repertory but did include a very through therapeutic and clinical index which will guide the physician looking for a remedy. It covers a great range from ‘flat wart to leprosy’. Due to which many worried physicians will be helped by guiding him to the sought for remedy. Arrangement of each drug in the form of name, natural orders, common name, preparation, proved by, how it is prepared, proving records from Various Journal and some Clinical cases. He has mentioned signs in some of papers in this book as from instance > means “diminishing” while < stands for “increasing”. In this book when the name of remedy is followed by a figure for example Pothos 1, it means the first centesimal potency or dilution. He has mentioned in Preface that “Value of this book may have is a permanent value, for the action of drugs on the human system like the law of the Medes and Persians ‘Changeth not’”.

Please note: This is a second hand book and may show signs of being loved by a previous owner: there may be wear and tear, corners may be creased, the previous owners name may be written inside the front page and even sometimes underlining of words. However, sometimes the book may also be new. Also the cover or edition may vary from the one shown. 🙂