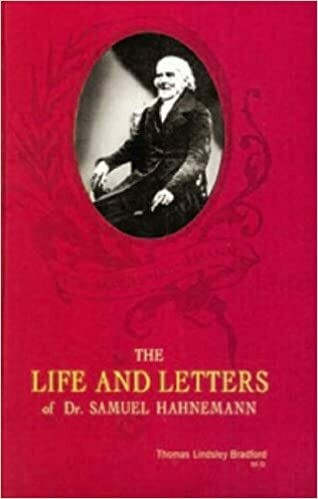 Hahnemann's life pieced together from the work of Ameke and Dudgeon, and punctuated by his letters which have appeared in journals, newspapers and other sources.

Chapter 1: Meissen - The porcelain factory. - The house where Hahnemann was born.

Chapter 2: Story of the earlier days of Hahnemann, told by himself. - School life. - Leipsic. - Vienna.

Chapter 4: School Days - Thinking Lessons - The Lamp of Clay - Hahnemann to be a grocer.

Chapter 5: Life at Leipsic and Vienna - Poem to Professor Zeune.

Chapter 8: Dissatisfaction with mode of practice - Letter to Hufeland - Hufeland on homoeopathy - Medical anarchy of the time.

Chapter 16: Letter to patient on cheerful methods of life.

Chapter 17: Epidemic of scarlatina - Departure from Konigslutter - Accident on the journey - Complaint to the public - Belladonna in Scarlatina - Altona-Medical liberality of the nineteenth century.

Chapter 19: Essay on coffee - Medicine of experience - Denial of a false report about scarlatina - Aesculapius in the balance.

Chapter 20: First collection of provings - The last translation - Medicine of experience - The Organon - Attacks upon its teachings.

Chapter 25: Hahnemann's opinion of allopathy - New persecutions - Appeal to the courts - The Leipsic apothecaries - Treatment of Field Marshal Schwartzenberg and his death.

Chapter 28: Literary work - Editions of the "Organon" - Founding of the "Archiv" - Prefaces to the "Materia Medica Pura".

Chapter 31: Public trials of Homoeopathy - Hering’s conversion - Letters to Hering - Accuracy of Hahnemann - His faith in the spread of Homeopathy.

Chapter 33: Chronic diseases continued - Psora a cause of disease - The itch theory - Dr. Raue on the itch theory.

Chapter 34: Letters to Stapf on the "Chronic Diseases." - Vaccination theory.

Chapter 35: Existence of the itch insect known to Hahnemann - Letter on birthday to Stapf.

Chapter 36: First method of preparing homoeopathic medicine - First pocket cases - Korsakoff on the use of class vials - Hahnemann's opinion regarding the practice of medicine - Letter to Dr. Eberhardt.

Chapter 38: Celebration of the fiftieth fest-jubilee at Coethen - Letter from Hahnemann concerning it - Foundation of first Homoeopathic Society.

Chapter 41: Death of frau dr. Hahnemann - Family life described - Letter to Stapf on the subject of the last illness.

Chapter 42: French biography of Hahnemann - True pictures from the life of frau Hahnemann.

Chapter 47: Right of the physician to be well paid - Allopathy - Censorship of the press.

Chapter 57: Muller's account of the Hospital - Letter to the half-homoeopathists of Leipsic.

Chapter 61: Condition of homoeopathy in 1834 - Letter and diploma from the Gallican society - Hahnemann visits the Leipzig hospital - Denunciation of household adviser - Sixth meeting of central union - Last festal day in Germany - Last appeal for the hospital.

Chapter 66: Departure for Paris - Letter by Dr. Peschier - Permission to practize granted - Honors from Gallican Homoeopathic Society - Address of Hahnemann - Kretzschmar on a union of homoeopathy and allopathy - Hahnemann’s answer.

Chapter 67: Practice in Paris - Red-letter fête days - Treatment of the Duke of Anglesey - Presentation of medal by French physicians.

Chapter 69: Life in Paris - Story told by a former patient of Hahnemann - Correspondence between Dr. Balogh and the Hahnemanns.

Chapter 73: A cure by Hahnemann - His preface to Arsenicum - Sixtieth anniversary of graduation - Rules of French Homoeopathic College - Homoeopathy in Paris.

Chapter 75: Eighty-fifth birthday - Cure of the child of Legouvé.

Chapter 79: Personality - Lessons from his life - Birthplace - Personal traits - Examination of a student.

Chapter 81: Relations to his patients - Mode of life - His religious views - Vigor in old age.

Chapter 82: The posology of Hahnemann.

Chapter 87: Letter to Dr. Nichols, regarding Madame Hahnemann, by a former patient - Visit of Dr. Neidhard.