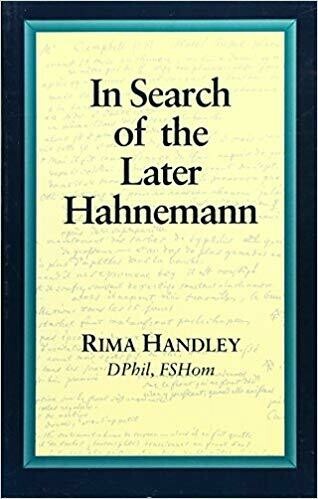 In search of the later Hahnemann*

A study of Hahnemann's cases and prescribing methods in Paris, during the final phase of his life.

A thought provoking book, which gives us the opportunity to re-assess our representations of Hahnemann with the real man. It might too, perhaps, help to ease the never ending disputes over Hahnemann's belonging to the unicist or complexist school. Rita Handley's portrayal of Hahnemann is sober and realistic and shows a man who was much more versatile than many of us might like to think.

This book is the story of Samuel Hahnemann's practice of homeopathy in Paris during the last years of his life. It is based on his actual casebooks, which up till now have been left substantially unexamined in a German library.
It was to Paris that Hahnemann had moved with his young second wife, Melanie, and here that he completed the second edition of his Chronic Diseases and the final revision of his major theoretical work, the Organon. We see him putting into practice the implications of his thinking on chronic disease, experimenting with some of the new remedies being developed by himself and others, and pushing his conception of the infinitesimal dose to undreamed-of lengths in the LM potency.
The whole range of his Paris patients appear in these pages. Some of the cases are quoted at length -there are successful cures, but we also see him making mistakes, improvising, getting stuck and lost in his cases, yet always trusting in the principles he had himself formulated. We see him as a whole person and witness the process of the learning and making of homeopathy.

Rima Handley taught medieval literature at the universities of London and Newcastle for several years. She subsequently trained and now practises both as a homeopath and a psychotherapist. She was the co-founder of the Northern College of Homeopathic Medicine in Newcastle.