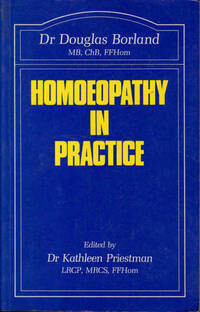 - with Symptom index
- Guidance on the observation of symptoms and the choice of remedies.

The importance of retaining the writing records of past masters' clinical experience is obvious if we do not want to have to constantly reinvent the wheel! The material composing this book is taken from Dr Borland's course to doctors at the London Homeopathic Hospital, in the nineteen thirties. It covers a wide variety of conditions commonly seen in general practice and their homeopathic treatment.

What remedies should you keep for the emergencies of general practice? How does the homoeopath treat pain? What can homoeopathy offer for gastroenteritis or the common cold, or for virus infection in general? How do you distinguish between the remedies? The author covers a wide variety of the complaints and disorders that are commonly seen in general practice, with detailed guidance on their treatment by homoeopathy. He then studies a number of major groups of related remedies, analysing the characteristics they have in common and those that differentiate between them.

Dr Douglas Borland presented the material in this book as a course to doctors at the London Homoeopathic Hospital during the nineteen-thirties. It has been edited for publication now by Dr Kathleen Priestman, who attended the course at the beginning of her medical career. The book is published because Dr Borland's homoeopathic insight remains as fresh and important today as it ever was. Wherever current medical practice has moved on since his day, notably in the availability of antibiotics and the development of modern surgical techniques, the text has been edited to take this into account.