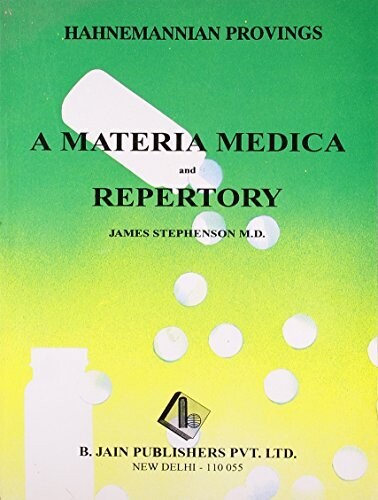 Although ancient in practice, the science of testing medicines on healthy humans was first formulated by Hahnemann and has remained within the homeopathic discipline ever since, save during the past 25 years when it was rediscovered by non-homeopathic physicians such as H. Gold and H. Beecher, who called it, variously, Clinical Pharmacology or Human Pharmacology.

Homeopathic physicians have called it, simply, Provings, from Hahnemann’s term PRUFUNG, German for test or experiment. HYGANTHROPHARMACOLOGY, from the Greek HYGEIA, health; ANTHROS, man; PHARMAKON, medicine and LOGOS, discourse on, would appear to be suitable both in content and form, since it is descriptively complete & internationally understood.

• This book really consists of two books, a Repertory and a Materia Medica. The Repertory is an attempt to bring Kent’s Repertory up to date, as no new medicines have been added since 1924.

Of a total of 59 new provings, which have been reported in both Occidental and Oriental homeopathic medical journals since 1924, 37 were performed on at least three test subjects.
• These 37 medicines have been included in this volume.
• Although the selection of at least three provers as a minimum criterion was an arbitrary one, on checking the original proving data of a number of remedies omitted by Kent from his Repertory (such as Bacillinum, Electricitas, Luna and Thyroidinum) none was found to have been tested on three provers or more.
• The subject divisions and grading of symptoms used by Kent have been followed whenever possible.
• However, particularly among the mental symptoms, the descriptions reported directly by the provers have often been used if there were no suitable synonyms in Kent.
• Also, in addition to the proving symptoms, graded as by Kent into regular weight type (without clinical confirmation), italics (with scattered clinical confirmation and bold type (with frequent clinical confirmation), two other groups of symptoms were included:
• Toxicological, resulting from accidental provings (indicated by a superscriptt after the medicine [e.g. cad-mt ]).
• Clinical, representing symptoms, which had apparently responded to the particular medicine but had not been produced by provings or poisonings (indicated by enclosing brackets [….] e.g. [arist-c]).
• If the symptoms, graded as by Kent in italics or bold type, represented clinical confirmations of homeopathically proven symptoms no superscript was used.