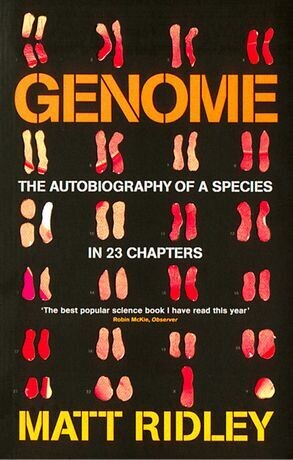 Genome: The autobiography of a species*

00730
AU$15.00
In stock
1
Product Details
Author: Ridley
Genome: The Autobiography of a Species in 23 Chapters is a popular science book by the science writer Matt Ridley. The chapters are numbered for the pairs of human chromosomes, one pair being the X and Y sex chromosomes, so the numbering goes up to 22 with Chapter X and Y couched between Chapters 7 and 8.
The book was welcomed by critics in journals such as Nature and newspapers including The New York Times. The London Review of Books however found the book "at once instructive and infuriating".
The book devotes one chapter to each pair of human chromosomes. Since one (unnumbered) chapter is required to discuss the sex chromosomes, the final chapter is number 22. Ridley was inspired to adopt this model by Primo Levi's book The Periodic Table.