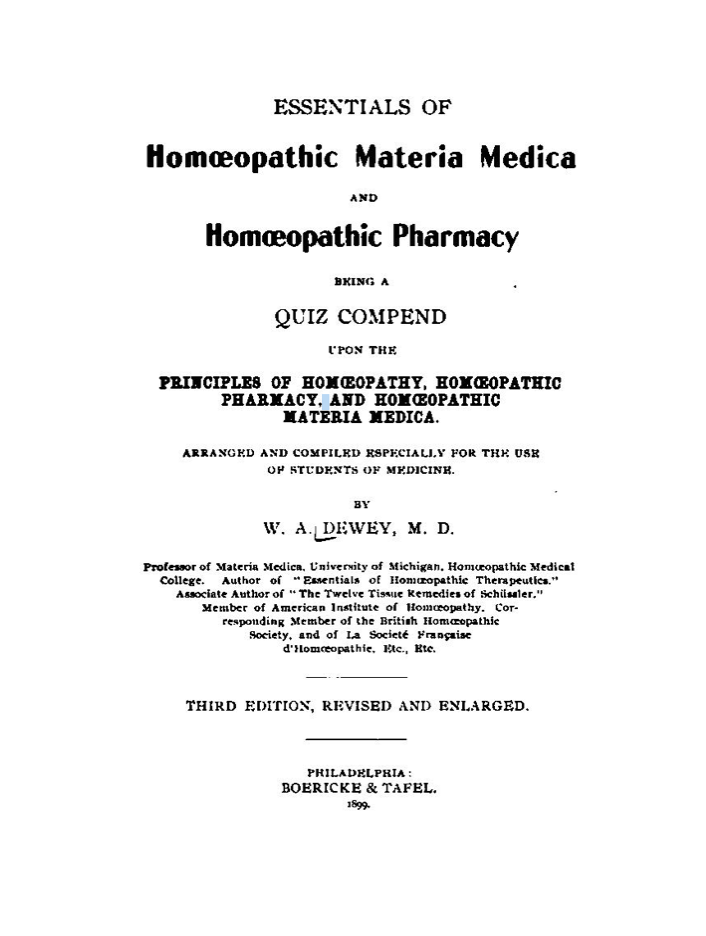 N the pretace to the first edition of Ahis work, pub¬lished in 1894, it was stated that the aim in its prepara¬tion was to condense, giving nothing but the Essentials, nothing but the barest skeleton of the subject; that it was not intended for use as an " Eselsbriicke,” nor to supplant, but, rather, to accompany the larger text¬books on Materia Medica; and that it was designed merely as a re-arrangement and simplification of the sub¬ject of homoeopathic Materia Medica for the use of the student.
In the preface to the second edition, published in 1894, gratification was expressed at the uniformly favorable criticism bestowed upon the work, and at the rapid ex¬haustion of the first edition. New remedies were added, the index enlarged and corrected and the chapter on pharmacy improved.
In the third edition, appearing in 1899, which the publishers saw fit, on account of its popularity, to make a large one, many improvements suggested by the author's fifteen years' experience as a teacher were in¬corporated. The mode of preparation of each drug, as far as possible, was made to conform to the original methods of Hahnemann and others, and references to the original studies were added. The entire work was revised, its language corrected, and many pages of new matter was added, consisting of new remedies and more complete indications for the use of many of the older ones.
The present or fourth edition has been bettered considerably, a few pages of new matter have been added, and several innovations in the Materia Medica and therapeutic field have received attention. Being essentially a students' manual, it was not deemed wise to enlarge it, but to make it precise and exact.
The use of the work as a text-book in a number of our medical colleges, its translation into the German, French and Portuguese languages, the latter with an introduction by Dr. Richard Hughes, of England, and the universally favorable reception of the preceding editions, have encouraged the author to believe that it fills the place ir» our literature for which it was originally designed.