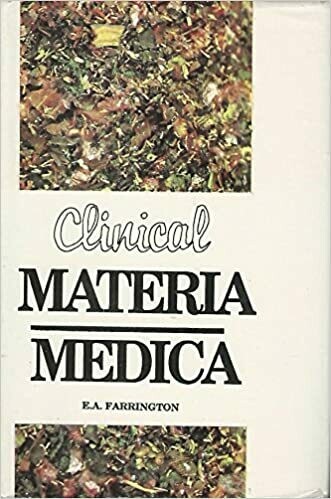 Over 100 years before the current fascination with plant families, animal remedies, and the Periodic Table, it was Farrington, who originally put forward the concept of studying materia medica within the context of families and kingdoms.

Written in beautiful prose discussing the remedies and their applications. A work of great love and detail which enhances the reader's knowledge of materia medica considerably.

Example: Page 263 - Pus - Herein lies a positive distinction between Rhus and Apis, which never produces cellulitis with abscess. In carbuncle, another form of connective tissue inflammation, Rhus is indicated in the beginning, when the pains are intense and the affected parts are dark red. If given early, Rhus may abort the whole trouble. If not, you may have to resort later to Arsenicum, Carbo veg., or even Anthracinum.‎

From the preface: DURING the year following the death of Dr. Farrington, the editor of this volume published several of the lectures here presented, in the Hahnemannian Monthly, North American Journal of Homoeopathy, and Monthly Homoeopathic Review. These were well received by the profession. A number of physicians expressed the desire to have the lectures appear in the book form. The consent of Mrs. Farrigton to such publication were therefore obtained, the Doctor's manuscript was placed at our disposal, and Dr. S. Lilienthal kindly consented to revise the lectures after their completion in manuscript.

In order that the work should be thoroughly representative of Dr. Farrington, those conerned in its preparation for the press decided that the author's style should be closley followed. These lectures are therefore presented exactly as delivered, excepting where a change was suggested by his manuscript or by his published writings.

There have also been incorporated in the volume numerous abstracts from the comparisons in the "Studies in Materia Medico," published in the Hahnemannian Monthly in the years 1880, 1881, and 1882. These will be found in the lectures on Lachesis, Apis, Cantharis, and Sepia.

Ernest A. Farrington (1847-1885) was born in New York, United States, on January 1, 1847. Upon graduating from the Philadelphia High School Farrington had achieved the highest marks known within the institute. It was in 1866 that he graduated from the Homoeopathic Medical College of Pennsylvania and one year after that he began his further studies at the Hahnemann Medical College. Later he became a close associate of Hering.

Dr. Farrington's mind was given to profound research in many areas of homeopathy. However, his main drive was to be found in the study of materia medica and he undertook supervised provings. The acuity of Farrington's mind is brought to light when we consider the growing contemporary interest in studying homeopathic materia medica within the context of families and kingdoms. It was Farrington, a real 'family man' who originally put forward the concept and even published a book on comparative materia medica based on the kingdoms.