It has been called the end of modern medicine as we know it. Superbugs are the start of a “post-antibiotic era – in which common infections and minor injuries can kill – far from being an apocalyptic fantasy, is instead a very real possibility for the 21st century.”

Antibiotic resistance is a global threat to human health

Antibiotic resistance is a global threat to human health. Hosam Zowawi is fighting back with science and a communications plan for the Gulf states. Hosam Zowawi is face-to-face with a serial killer: in his laboratory in Brisbane, Australia, he is studying one of the most lethal microbes known to science, a strain of a typical hospital pathogen that is now virtually incurable. The young Saudi Arabian scientist, is studying ways of early identification of multi-drug resistant bacteria as we near the end of modern medicine in one of the greatest threats to human health of the 21st century.

Australia is one of the highest users of antibiotics in the world with around 22 million prescriptions written every year. General practitioners prescribe the greatest proportion of antibiotics in Australia, mostly for acute respiratory tract infections. Antibiotics remain the most common class of medicine prescribed in general practice.

Antibiotic resistance is increasing in the Australian community. Infection with a resistant organism then requires treatment with antibiotics such as vancomycin, carbapenems and fluroquinolones, which are often used when all other antibiotics have failed. For example, between 2001 and 2010, the incidence of MRSA transmission in the community doubled from 10 to 20% of all reported S. aureus infections. In Tasmania, a recent increase in Clostridium difficile – an infection closely correlated with antibiotic use – was observed. This was most likely linked to transmission and infection pathways in the community, not within hospitals, and was driven substantially by antibiotic use in the community.

The more antibiotics are used, the more chances bacteria have to become resistant to them. Major causes of antibiotic resistance include:

The end of modern medicine as we know it: Superbugs

“The post-antibiotic era, is a term which means the end of modern medicine as we know it. Things as common as strep throat or a scratched knee could once again kill. It is truly a global issue. We are at the dawn of a possible nightmare that can strike the entire globe. Due to several reasons. The research and development of new antibiotics has almost stopped. The existing antibiotics that are currently available are often…overused and that is fueling antibiotic resistance.”

The healthcare burden cost of antibiotic resistant superbug infections including MRSA superbugs in the USA alone is $8.4 billion. In fact, failure to tackle drug-resistant infections will lead to at least 10 million extra deaths a year and cost the global economy up to $100tn (£64tn) by 2050.

An awareness campaign about the  wise use of antibiotics has been launched on social media.

For an infected patient, the process of identifying the offending bacteria takes days which means the patient is put on a wide spectrum antibiotic while waiting for the test results to come back. It is imperative that faster identification of the bacteria is researched immediately.

Methicillin-resistant Staphylococcus aureus (MRSA) is a bacteria responsible for several difficult-to-treat infections in humans. MRSA is any strain of Staphylococcus aureus that has developed resistance to the penicillins and the cephalosporins. MRSA is found in hospitals, prisons and nursing homes in patients with open wounds and people with compromised immune systems.  MRSA first developed in hospitals but is now acquired in community settings.

Staph skin infections, including MRSA, generally start as small red bumps that resemble pimples, boils or spider bites. These can quickly turn into deep, painful abscesses that require surgical draining. Sometimes the bacteria remain confined to the skin. But they can also burrow deep into the body, causing potentially life-threatening infections in bones, joints, surgical wounds, the bloodstream, heart valves and lungs.

With the threat of the end of modern medicine, is there a role for homeopathy in MRSA treatment?

Methicillin-resistant Staphylococcus aureus (MRSA) infection is caused by a strain of staph bacteria that’s become resistant to the antibiotics commonly used to treat ordinary staph infections. One example of the homeopathic treatment of the MRSA superbug is documented in the book Good news For People With Bad News. 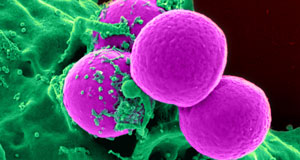 The patient says: “In deciding to do the homeopathy, I knew that I was going against conventional wisdom. Even Pierre Fontaine (the homeopath) advised me to go to the hospital. ….. At the end of the day, there is no real known cure for chronic MRSA, so there are inevitably all kinds of recurrences. When it’s diagnosed, doctors have protocols to follow. The gold standard treatment is broad-spectrum intravenous antibiotics. I took my healthcare into my own hands and did something that was risky, medically. To think you can use little white sugar pills to treat a potentially deadly infection is unheard of in this country. If I met someone with a MRSA infection now, how could I recommend that they find a homeopath and take care of it themselves? I know I did the right thing for myself, but what I did was beyond the norm……..After losing my mom in 1999 and my dad in 2010, both to cancer, I have a strong desire to educate others about healing ways that have been around far longer than modern medicine. They may be labeled as ‘anecdotal’ by the scientific community, but they have provided reversal from chronic and terminal diseases for many people”.