Let’s dig deep into our decision making with Sabina and Celeste and explore what this bias stuff is all about.

We all have biases and we can’t live without them. These decision making techniques help us make many decisions. When we use this kind of shortcut, Daniel Kahneman calls it fast thinking. We live most of our life with fast thinking, and for the most part it works for us. We make pretty good decisions, and have fun. But there are times when we use fast thinking where we can become unstuck. This shortcut leads us down the wrong path in our decision making activities.

When thinking about how to analyse a case study, then we need time to assess the assumptions and decision making skills that we usually use in day to day life. Using fast thinking simply won’t work for making the best decision we want to make. This is exactly the situation we face when case taking in homeopathy. Then we need to use slow thinking.

That’s not me, we hear you say! I always use analytical and considered thinking in my decisions in case analysis, or to quote Kahneman again who calls it “slow thinking”.

As homeopaths we have been directed by Hahnemann in Aphorism 83 and subsequent aphorisms, and great case study examples require “nothing but freedom from prejudice and sound senses, attention observing and fidelity in tracing the picture or disease”. Hahnemann directs us to examine, think deeply and also make our own assessments about what we see in the client (Aphorism 90). In doing this we can do nothing else except encounter our own biases.

Different types of Bias are unconscious drivers in our decision making

Let’s look at some bias examples by imagining a scenario* where a homeopath is working in a multidisciplinary clinic alongside a naturopath, kinesiologist, osteopath and massage therapist. The homeopath works two days a week face-to-face and online with their clients. Today the homeopath was particularly busy with three follow-up appointments and two new client appointments. 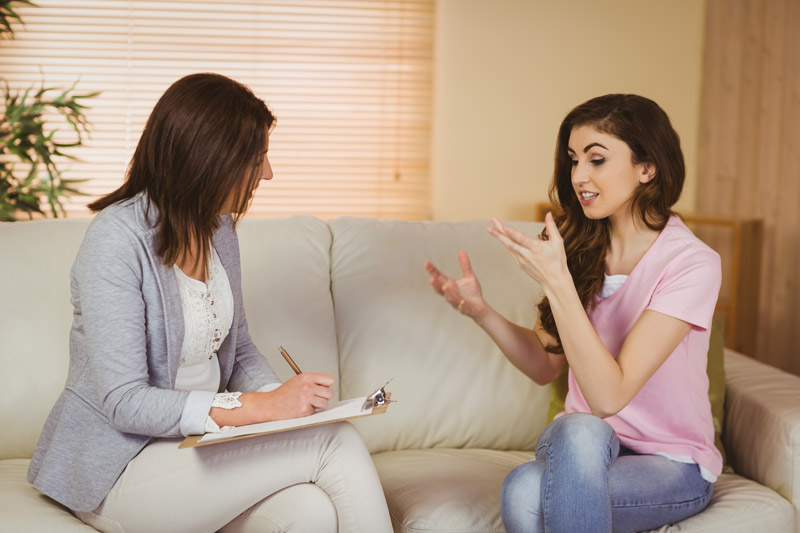 #1: One client, M. S., has been coming for several follow-ups over the last year. She initially came with debilitating migraines. Shortly after M.S. first started the homeopathic treatment, she had the worst migraine of her life – she was in bed for a week, couldn’t do much, was extremely tired, but after a few months she noticed she hadn’t had the migraines. She also made changes in her work and family life. Then, however, headaches started to appear again, which were less severe than the migraines but still noticeable enough to impact her day-to-day life, and in an earlier follow-up the homeopath prescribed another remedy. At today’s appointment M.S. said she hasn’t had recurring headaches for 2 months now and she’s very grateful for the help she has received.

Bias: this describes the Peak End Rule bias, where we might remember two aspects of an experience – the peak moment and the end of it. The question arises, has the homeopath explored what is the deeper underlying pathology? Or is the homeopath too caught up in migraines and associated modalities that the homeopath might have missed other critical markers that may have been the contributing factor to migraines?

#2: One of the clients, a 55-year-old woman, S.B., was a new client who was seeking homeopathic treatment for Hashimoto’s disease. S.B. has tried lots of other treatments before, but none seemed to have made a long lasting difference. S.B. hoped that the homeopath was like an expert in the field because the homeopath had been diagnosed with hypothyroidism at the age of 19. The homeopath took a detailed case but when the homeopath reiterated what S.B. said, S.B. had to correct the homeopath and could see that their understanding of symptomatology was not entirely accurate. The homeopath seemed to have mixed some of her own symptoms with the client’s symptoms and imposed her own values and attitudes on their client.

Bias: this is an example of the Projection bias. When observers see their own values and attitudes in their client and then assume that their clients behaviour is because of how they would do something. The homeopath considered thyroid conditions to be their area of specialty but failed to keep in mind the importance of taking the case as individualised as possible and leaving their own experiences of their thyroid condition aside. The client was double the age of the homeopath and that’s another example of the projection bias. Age is also considered an implicit bias where unconsciously we may be projecting our knowledge from life to someone who is younger, or someone who is younger may think they know more than somebody who is older.

How do we overcome this in practice? We need to dig deeper in our questioning with the client to understand why they reacted like they did.

Say for example the client presents with sadness. We learn that their boss keeps monitoring their workplace behaviour and there is a looming threat they will lose their job. We’ve had an experience of being under this level of examination in a previous job, where we felt humiliated every time the boss questioned what we were doing, and sad because we felt trapped and weren’t able to see how to change our situation. 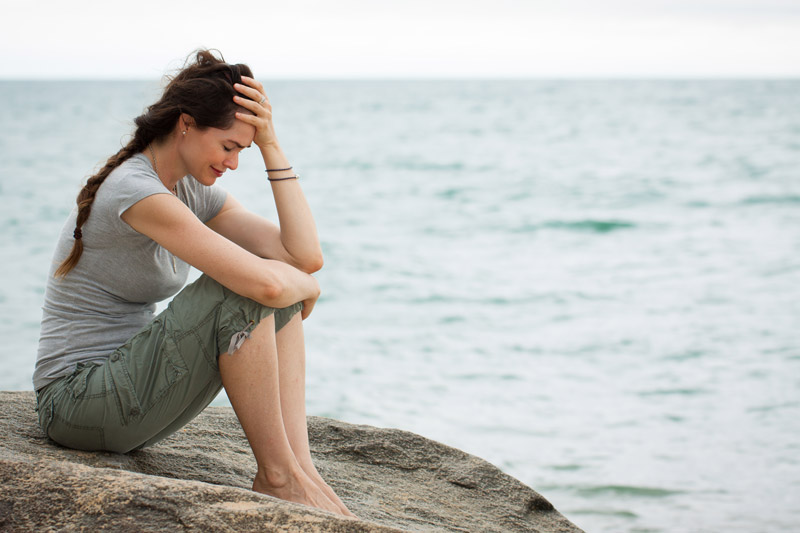 We assume the client who is sad, is sad because of humiliation (the actual experience of the practitioner, not the client). If we don’t question this, we miss the moment to learn why the client is sad. We might find out that the sound of the boss’s voice when angry is reminding them of a parent’s voice. They don’t feel humiliated at all, but sad that they (like a child) can never stand up for themselves.

#3: Another client, a male in his 40s, was feeling a bit tired and lightheaded. He has been coming to the clinic for a while but today when he arrived at  the clinic, he immediately noticed an intense smell coming from the humidifier. It was a mix between floral and herbal scent, something that smelled nice, but also overpowering. After a few minutes his headache started.

Bias: this is one example of the Priming bias. Our reaction to a stimulus causes us to have a similar response unconsciously.  The smell in the clinic can contribute to how somebody is feeling and that can steer what the follow-up consultation focuses on.

We’re being primed all the time, and it is one of the reasons why advertising is so addictive and effective. Remember those movies where they place the product in the shot – like a breakfast cereal box on the table? When we walk down the supermarket aisle we see that brand, it looks familiar and we are drawn to it. We don’t even question if we could eat something else for the first meal of the day.

The same kind of trigger can be achieved verbally and sensorially. If I mention to you casually I’m about to drink a cafe latte, and then a few hours later, you’re asked about drinks you could buy in a coffee house, it’s very likely the first thing you remember will be cafe latte. If you walk past a coffee and smell it, it’s also very likely that you will want to drink one soon after (assuming you like coffee).

In practice this could be happening too. If the practitioner asks closed questions, they could inadvertently get the answer to a question they want to ask, by setting up the answer before asking it. Open ended questions are the way around this. The closed question: “Do you like coffee?” could be replaced with an open question “What kinds of drinks do you like?”

There is more to say about this with regards to chocolate desires in women and pizza desires in young children!

#4: The next client, T.F., has been coming to the clinic for a while. She starts to talk about her difficult relationship with her mother. T.F. is slouched on the chair, moving around, looking up and down and all over the room. She appears to be in great distress about the state of her difficult relationship. The practitioner notices all of this discomfort and sympathises with her, also having a very difficult mother – daughter relationship. The practitioner asks a closed question about it. T.F. agrees as her relationship is difficult. The practitioner moves on and prescribes a remedy. T.F. doesn’t mention that she is experiencing indigestion, as she is too embarrassed about having eaten a bag of hot chips before coming into the consultation, knowing greasy foods cause her great physical discomfort.

Bias: This is described as Observer bias. As homeopaths we are taught to be the unprejudiced observer but in reality, is it possible to be completely unprejudiced at all times? We all have our values, beliefs and understanding of things and when we see something or somebody, we immediately form an opinion about them, about their looks, how they are dressed, how they behave, etc. The best way to minimise observer bias in homeopathy is to use standardised reporting tools, such as Measure Yourself Medical Outcome Profile (MYMOP). This scenario also has  Acquiescence Bias (see example #5).

Bias: This was an example of the Acquiescence bias. It’s a very common bias in homeopathy practice. People are more likely to say yes to any question that is asked of them. We really need to be mindful of this in our case-taking. The homeopath will likely get positive responses to some of the closed-ended questions and this is not helpful when repertorising and choosing a suitable remedy. It is best to ask as many open questions as possible during the consultation and this would minimise not only the acquiescence bias but also improve the overall case taking, analysis, and choice of remedy. 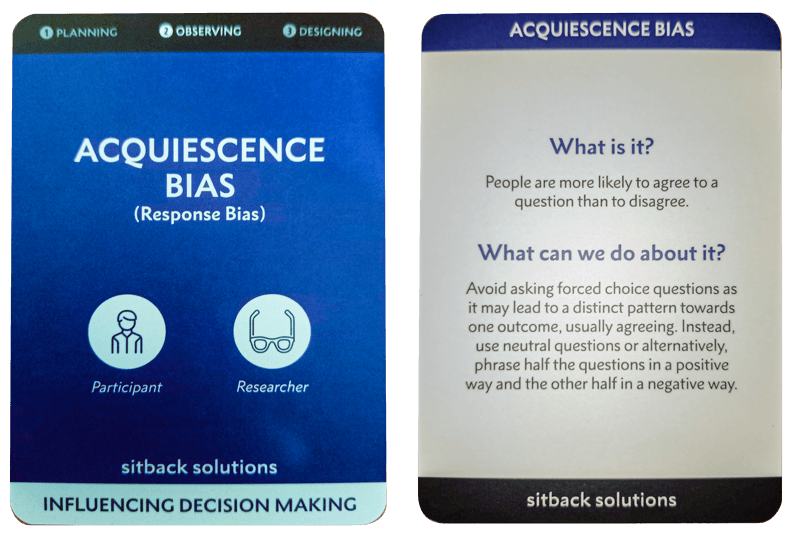 Acquiescence Bias Card from Sitback Solutions: an example from the Bias Card pack

The way around acquiescence bias is to ask open questions. For example:

“Are you thirsty?” – “Yes”. This is not a good question to understand a person’s thirstiness.

“How would you describe your thirst?” – “Thirsty”.

“What do you mean by thirsty? Can you describe a little bit more for me, so I can understand your thirst?” – “I drink 3 glasses of water every hour and still I feel like my mouth is dry”.

One of the great things we can do as practitioners is get in touch with our biases, beliefs and how they drive our decision making. When a bias is known and acknowledged, we have a greater chance of seeing where it could be driving us in the wrong direction. We hope you have found some of these ideas worthwhile. We will write about some of the common biases in research in our next blog post coming soon!

* These scenarios were created based on our understanding of typical clinic experience highlighting what the potential biases could be.

Learning about your biases

We have been examining types of bias in research and practice this year at the same time as acknowledging the reputation that homeopathic practitioners have as unprejudiced observers. It is no great revelation that it is part of the human condition to have biases.

The Bias Cards produced by Sitback Solutions are helpful as they remind us about our biases and suggest what we can do about them.

Celeste Salter, PhD, BPyschSci, BE, PDHom(UK). Celeste is the current Research Coordinator at the Aurum Project and can be contacted here. She also runs a private practice in the Blue Mountains in NSW Australia, both in person and online.

Sabina Vatter, PhD, MA, BA, RSHom is the Research Integrity Officer at the Aurum Project and can be contacted here. She works at the Harbord Homeopathic Clinic, & www.svhomeopathy.com. Active in research, she is a Research Member at the Society of Homeopaths Research Sub-Committee in the UK, and a Senior Researcher at the University of Sydney, Australia.