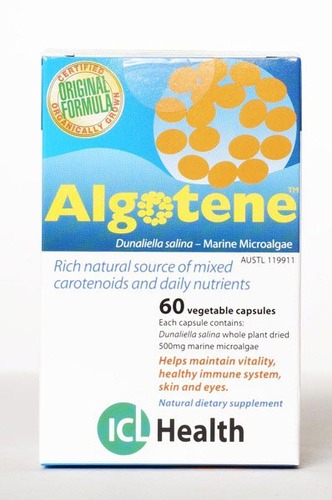 What is Dunaliella? Dunaliela is adapted to life in highly concentrated salt water – it is one of the most salt tolerant life forms known. Dunaliella salina is a single-celled green algae that lives in coastal waters, brine rock pools and salt water lakes.

Algotene is farmed in a remote part of Western Australia. It is grown in clean Australian ocean waters collected from natural tidal catchment ponds, and use pure sunlight as an energy source. No herbicides or pesticides are used. The algae are harvested and dried mechanically without the use of chemicals or solvents.

Algae is a nutrient-dense natural food that has been used for thousands of years by the Aztecs and South Pacific islanders. Examples of popular edible algae used around the world include Spirulina and Chlorella. Dunaliella salina, offers a number of distinctive benefits over these.

Benefits of Dunaliella Vs Spirulina and Chlorella

Dunaliella is arguably the most nutrient dense food source known. On a gram per gram basis, Dunaliella can contain more than twice the chlorophyll of Spirulina, 8 times the mineral content and 6,000 times the antioxidant content.

Algotene contains a mixture of natural carotenoids including beta-carotene, alpha-carotene, lutein, zeaxanthin and cryptoxanthin. Carotenoids are pigments responsible for the red, orange, yellow and green colours of fruit and vegetables. They may help to protect against free radical cell damage responsible for premature ageing, cataracts, cardiovascular disease and other chronic diseases.

Hypoallergenic formula: This product contains no wheat, yeast, soy, alfalfa, milk or corn allergens, gelatin, gluten, wax, artificial colours, flavours or preservatives. No added salt or sugars. Use only as directed. If symptoms persist seek the advice of a healthcare professional.