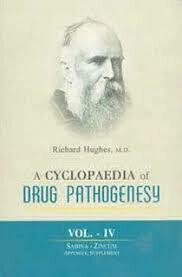 A cyclopedia of drug pathogenesy 4 volumes*

Published jointly by the British Homoeopathic Society and the American Institute of Homoeopathy. The four volumes contain records of all provings done till date. Drs. Drysdale, Dudgeon, Pope and Cowperthwaite, among others, helped the production and publication of this book.

VOLUMES :-This work has four volumes.

Richard Hughes was a great writer and a scholar. He actively cooperated with Dr. Timothy Field Allen to compile his ‘Cyclopedia of ... Pathogenesy‘ and rendered immeasurable aid to Dr. Robert Ellis Dudgeon in translating Samuel Hahnemann’s ‘The Materia Medica Pura‘ into English.

n 1889 he was appointed an Editor of the ‘British Journal of Homeopathy‘ and continued in that capacity until his demise.

Introduction
Introduction gives a full account about the origin, nature and objects of this work. The object of art of Medcine is the cure of disease. For this, practitioner of art – the physician, presses into his service all agencies which makes for health. These are taken from one or other of the kingdoms of Nature, which when administered to people, modify some or whole of his morbid state. They are discovered either empirically or rationally. Rational mode is by interference from their physiological effects. It is conceived that, the rational application of .... to disease will be greatly furthered by the presentation in detail of the original experiments and observations from which our knowledge of pathogenesy is derived.

Please note: This is a second hand book and may show signs of being loved by a previous owner: there may be wear and tear, corners may be creased, the previous owners name may be written inside the front page and even sometimes underlining of words. However, sometimes the book may also be new. Also the cover may vary from the one shown.